Wanna Try Your Hand at Smuggling? Give Prohis a Whirl. 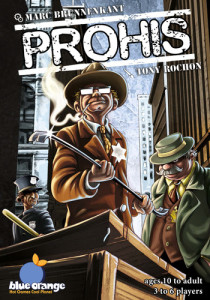 It’s been proven that if you take something away from people, someone else will step in to fill that void. Prohibition outlawed the possession and manufacture of alcohol. This is where you step in. Prohis, from Blue Orange Games, is a game of bluffing, as you try to smuggle goods past the other players and into the safety of your warehouse.

The rules are actually pretty simple. The game only has 3 types of cards. The first two are the most common, Legal and Illegal Goods. These cards will make up the bulk of your caravans as you try to smuggle things to your warehouse. Illegal goods are worth a lot more points than Legal goods, but if you get caught with them all those points go to whoever caught you.

The final type of card are the Prohis. The Prohis are primarily used to inspect other player’s caravans. Prohis come in three types, which determines whether you ca inspect 1, 2, or 3 cards in a caravan. If an inspection turns up an Illegal good, all the cards in the caravan go to the inspectors warehouse. If only Legal goods are found, the cards go to the smugglers warehouse, and they get to take the Prohi card used into their hand to use later.

The thing I like most about this game is the bluffing aspect. When someone tries to inspect your caravan, you can try to bribe them to go away. You can offer them cards from your hand to make them reconsider. Of course, you could be trying to tempt them into inspecting your caravan when you know they won’t find anything illegal. Bribes can always be refused by the person playing a Prohi card if they choose.

The game plays fairly quickly, depending on the number of players, most of my games have averaged about 30-40 minutes.  It is rather similar to another popular bluffing game, Sheriff of Nottigham. However, Prohis is about 1/4 the size and plays in half the time. I like these smaller sized games because I can take a lot of them with me when I go somewhere to play games.

While you might not become the next Beer Baron of the world, you might find yourself having a fun time as you make your friends never want to believe anything you say ever again.