Villainous: Asymmetry at its Vilest 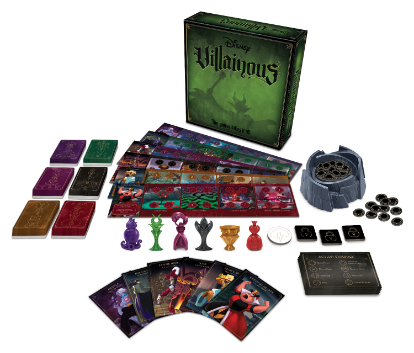 Ah, deary. Come in, come in. You look bedraggled and starved. Sit down by the nice fire, now. Once you’re settled, I’m going to offer you supreme power.

Yes, you heard right, supreme power. No catch. Well, there is one catch. Well actually, more like five catches, each in the form of someone else who wants all the power for themselves.

In Villainous, you’re going to jump head-first into one of the most iconic Disney realms of all time. Atlantica, Wonderland, The Sherwood Forest, Agrabah, Never Never Land—they’re all here.

The coolest part? You’re the strongest being in the entire realm. You are the VILLAIN, and it’s up to you to achieve your devious goal before your competition can do the same. It’s a race to be the baddest!

How to be Bad 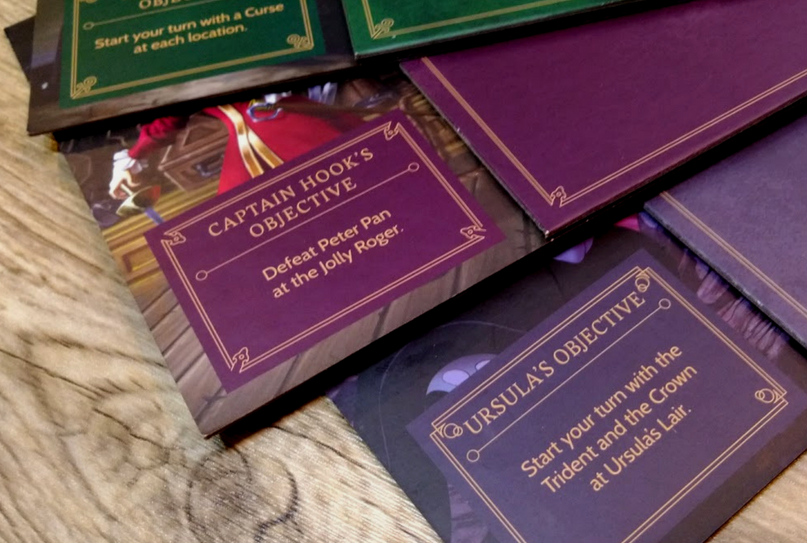 Villainous is a game of asymmetric goals and strategies. That is to say, each Villain has their own way to win the game and completely unique resources that will help them do so.

For instance, Ursula wins when she defeats King Triton to take control of the Trident and Crown and brings them both to her lair. Meanwhile, Prince John is simply trying to gather a pile of 20 power, the main currency in the game. But is that really so simple?

Indeed not, because each player also has a Fate Deck of cards that their opponents can use against them. When Heroes like Robin Hood appear in Sherwood Forest, Prince John begins to hemorrhage power—and Jafar’s schemes will slow to a crawl if Jasmine and Rajah show up on the streets of Agrabah.

Different Objectives, Same Rule Set: Unlike some asymmetric games, all players in Villainous adhere to the same set of game rules, so you won’t have to memorize six different games just to play the one.

Here’s a quick overview: The first thing you’ll do on each of your turns is to choose a new location to which your Villain will move. Each of the locations in your Realm offers you four actions—anything from gaining more power and playing cards, to vanquishing Heroes in your realm and playing Fate Cards against an opponent.

When you arrive at a location, you get to take all four actions. However, if your opponents have played any Heroes from your Fate Deck, some of your locations will lose access to actions—at least until those Heroes are vanquished like the pathetic pests they are.

As a result, you’ll find yourself consistently balancing your dual objectives: Progress toward your win condition WHILE slowing down your opponents.

To make matters more difficult for you, each Villain’s Fate Deck is built to counter their goals. Maleficent’s foes are equipped to break her curses, while Prince John’s Fate Deck is geared toward stealing as much power (from the rich, for the poor) as it can.

The Game Looks Pretty Pretty. Is it Pretty? 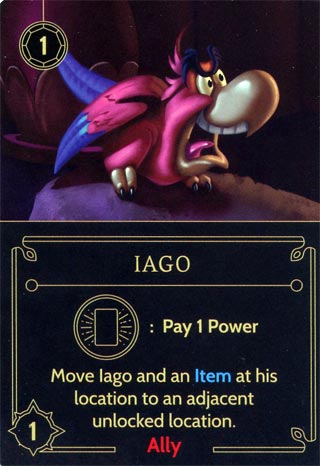 The card art is incredible, evoking memorable moments from classic Disney films, but adding shading and depth to give the images new life.

Plus, the game components all feel both novel and sturdy. Each villain is represented by an abstract—but readily recognizable—miniature. Each Villain’s realm lives within an attractive foldout board, the front of which is adorned by an iconic quote from that Villain.

If I was going to complain about one thing, it would be that the “Cauldron” that holds all the spare power feels a bit flimsy. But it does the job just fine and looks good in the center of the table.

Making the Most of your Villainy

First off, there are A LOT of cards and abilities to keep track of. The first couple times you play this game, your opponents will have cards in play for turns at a time before you finally decide you should read about what they do.

It’s not crucial that you have a firm grasp on every single card in play at all times—you’re mostly watching your opponents to see when they need a bit of a swat from their Fate Deck—but there is enough going on that this definitely isn’t a game for kids under 10.

I’ve heard that the game can drag with five or six players, and I believe it. I played two four-player games, and they didn’t feel too long, but I wouldn’t have wanted to play any longer than we did. Because of this, I think the game would feel ideal at 3 or 4 players.

Lastly, if you don’t like playing games where you’ll occasionally get teamed up on, you may want to skip this one. Thankfully, the “gang up” moments in this game usually feel justified and good-humored, and they’re always momentary. Once your fellow players feel they’ve slowed you down a bit, they’ll move on to the next most threatening Villain in line. “The Queen of Hearts only needs one more Wicket before she can take the shot and win! Let’s knock her down a couple notches! Where’s Alice?”