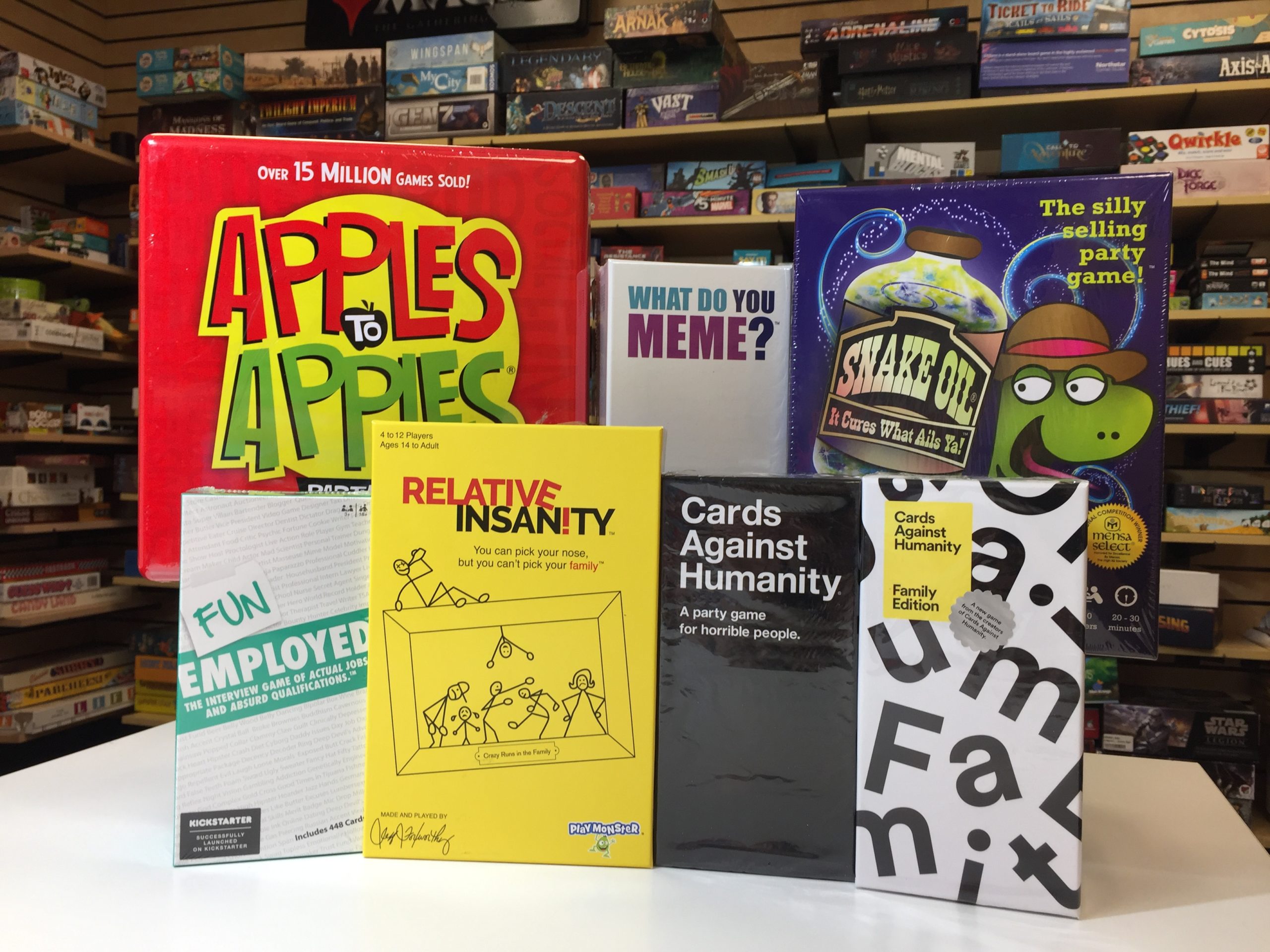 The board game landscape was forever changed in 1999 when Out of the Box Publishing first printed Apples to Apples.  It featured a totally new game mechanic, where the Judge in each round would select their favorite response among those given by the other players.  The game’s inventor Matt Kirby says he wasn’t originally intending to invent a board game – he was just inspired by the idea of stimulating some interesting conversations.  Eventually he realized he was onto something that could be big, and he landed on a board game mechanic that was completely unique and revolutionary.

As a history nerd, I am forever fascinated by the transition between old time parlor games and today’s commodified party games, which are produced and sold in cardboard boxes.  For example, the game Balderdash was first published in 1984, but it’s based on an older parlor game called Dictionary.  In fact, I have a book of parlor games published in 1979 which lists Dictionary as an “old and honored game.”

Long have humans amused themselves in their living rooms playing games that require players to:

Some parlor games, such as Telephone, Charades, and Botticelli, require a combination of guessing and making-things-up.  Renditions and twists on many of these old parlor game mechanics have found new life and ease-of-accessibility in packaged party games available on our shelves today.   (Telestrations and Guesstures have been a success.  Nothing has panned out in the commercial world for Botticelli though.)  This makes it quick and easy for anyone to play, because I’m guessing you don’t have a dictionary at home anymore.

There’s another time-honored parlor game we all know called Truth or Dare, which has been documented for hundreds of years.  This parlor game has allowed for the evolution of any number of assorted “tell us the truth” games and “do silly things” games.  Somewhere along the line, though, we start to see the introduction of player opinions into party games.  This movement is evidenced by entries such as True Colors (1989), Loaded Questions (1997), and Zobmondo’s Would You Rather? (1998).  As you would expect from any quality game of Truth or Dare, of course these games focused on material that is slightly racy or embarrassing!  These games featured questions like:

“Which player do you think is wearing the sexiest underwear?”

“If you were invisible, where would you go?”

“Would you rather show a video of yourself on the toilet or throwing a tantrum?”

Even though player opinion is a factor in the games, they’re guessing games at the core.  You would be presented with a premise, players were often playing from the same set of available options, and your scope for making comparisons and decisions was always limited to either the set of players at the table or simply a binary choice.  You would form your opinion, submit your opinion, and then check to see how you scored.  These games are certainly fun, but after submitting your opinion, your opinion doesn’t matter much anymore.  There’s no comparison to be made during the scoring phase of each round; that part is already over.

Then in 1999, along came Apples to Apples, which turned everything upside down.  Suddenly, not only was everyone playing simultaneously, but players were engaged all the way through the turn.  Each player would select from a novel set of choices in their hand!  This really got you thinking outside the box, making comparisons you’ve perhaps never made before in your life.  You had to consider your own opinion versus the perceived opinion of the Judge.  This allowed for a really exciting feeling of human connection – that “how well do you know me” type of connection.  And then there was the hilarity of the reveal – finding out what responses everyone else submitted, all unique discoveries.  Combined with the tension of waiting to see if your response would be chosen above all others, this was a smash hit!

Apples to Apples was such a hit as we entered the early 2000’s, that it spawned numerous spin-offs and special editions.  To date, there have been over 30 official expansions and editions for Apples to Apples.  But its dominance was not to last forever.  A few things happened to alter the landscape, which would eventually topple it from its mighty throne. 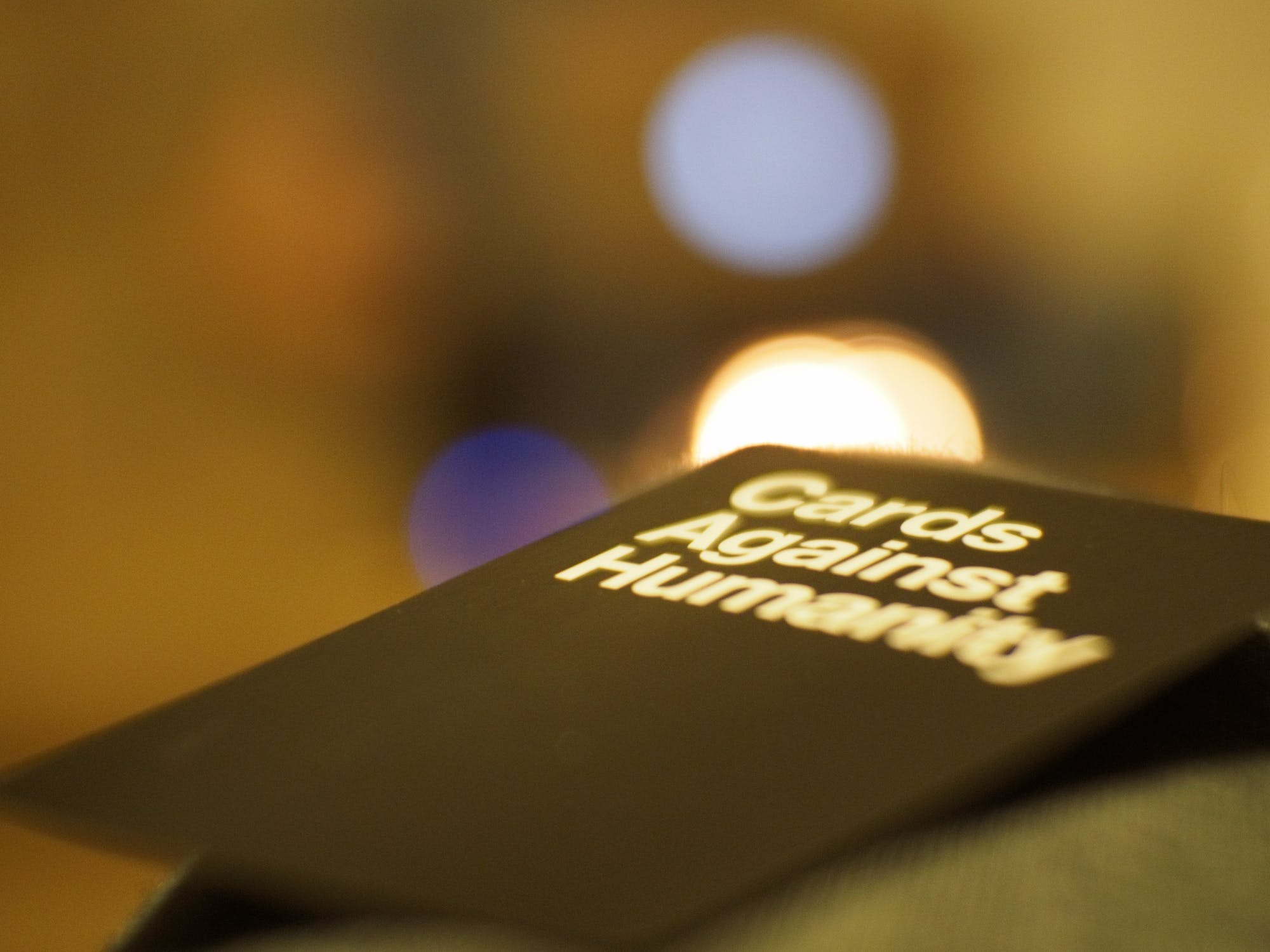 The first factor was when Out of the Box Publishing sold the Apples to Apples property to Mattel around the end of 2007.  While Mattel may have been able to give the game increased production, they were ultimately unable to give it increased focus and attention.  Even though units sold went up, Mattel could never love one board game in their massive catalog the same way a small game publisher would have loved their top selling title.  At Board Game Barrister, for instance, Apples to Apples was a top seller for years, but its sales peaked around 2009, and by the early teens it was no longer a top seller.  While Apples to Apples remains in print from Mattel to this day, Out of the Box Publishing eventually ceased operations in 2015.

The second factor that occurred right after Mattel acquired Apples to Apples was that the game had become so popular that others began borrowing and adapting the “Judge Picks” mechanic.  The time span of 2009-2011 saw numerous derivatives coming out onto the market from other game publishers.  There were some duds in the mix, but we also got such gems as Snake Oil (which is now back in print, as of this writing) and Crappy Birthday (sadly now out of print).

This is also where we saw the first derivatives that attempted to add photos into the mix.  But unfortunately the time wasn’t quite right for these, possibly because internet memes were still in their infancy (well, perhaps their adolescence, rather) at this point in history.  Facebook didn’t add the “share” button until late 2012.  So while internet memes did exist in this time period, they were not yet a mass consumer experience; they were more of a growing cult phenomenon at this time.

The third factor that occurred in the 2009-2011 timeframe was that everyone started getting smartphones.  2010 seems to be the peak of the bell curve for smartphone adoption.  In 2011 another (short-lived) game craze swept the nation, which was entirely made possible by smartphones.  And the name of that game craze was: Angry Birds.  If you were there, I’ll leave that as a story you can tell your children.

The fourth and final nail in the proverbial coffin, which also occurred in the 2009-2011 timeframe was the emergence of another revolutionary Apples to Apples game derivative.  You’ve probably heard of it; it’s called Cards Against Humanity.  Cards Against Humanity took the unique Apples to Apples game mechanic and tacked on the racy, risque content material that people already loved having at their parties.  Cards Against Humanity caught on slowly at first, but it had lucky timing.  Its popularity eventually spread like wildfire, coincidentally (or not?) hitting its stride at about the same time that the “share” button got introduced on Facebook.  It went viral, and we could no longer ignore the crowds clamoring for this game.  It’s hard to believe that it’s been around for over a decade now.

After Cards Against Humanity hit its peak popularity, and internet meme culture was in full swing, the world was finally ready for the meme theme to be added to the “Judge Picks” mechanic.  This trend started with titles such as Say What You Meme (2013) and HashTagIt (2016), but ultimately the runaway hit became What Do You Meme? (2016).

As we look back at this fun trip through game history, we can see interesting turning points.  My prediction is that we are now seeing the final chapter of this movement.  We have now come full circle with 2020’s release of Cards Against Humanity: Family Edition and the impending arrival of What Do You Meme? Family Edition in early 2021.

I look forward to finding out what movement carries us through the next decade of social gaming!

In fact, this recent blog post from Barrister Andy ponders one possible such movement.