Magic: What is the Stack? 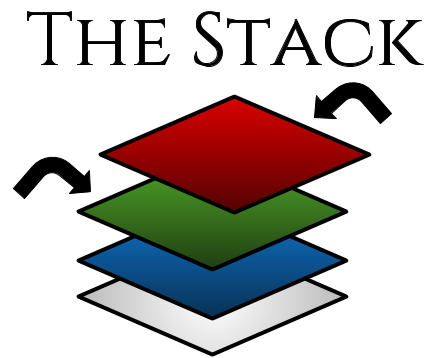 For any newer Magic player, the stack can feel like a distant, guarded knowledge. This is because experienced players aren’t always sure when to delve into the next level of complexity with a player who has only recently learned how to attack and block.

A good analogy for this is fishing: anyone with a rod and a worm can go out and catch a fish, without ever needing to know about migration patterns, types of lures, netting, where to position your bait, and so on. In the same way, a new Magic player only needs a deck and some basic rules to play an entire game of Magic. The stack is just the next level of knowledge and experience.

So when should you learn about the stack? 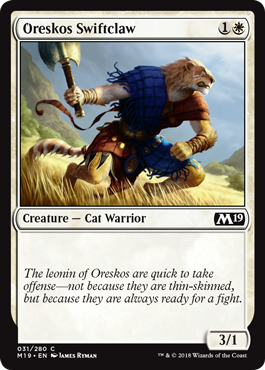 Why do we need the stack? 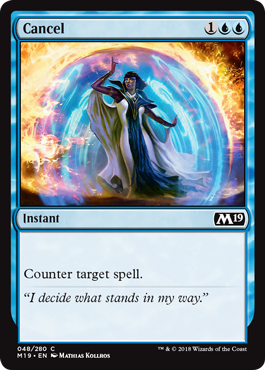 There is a lot going on in a game of Magic, and the stack is a tool to help us keep track of what spells and abilities are in line to affect the game.

Every single spell or ability that your cards initiate must use the stack before they affect the game.

You’ve probably seen a scenario where one player cast a spell, then the other player played a counter spell. It’s a simple enough exchange, but it takes place on the stack. So what’s really happening when these two cards are played?

Player One casts Oreskos Swiftclaw by paying its mana cost and adding it to the stack—because it is on the stack, it has not yet resolved and entered the battlefield—then Player One passes priority to Player Two. 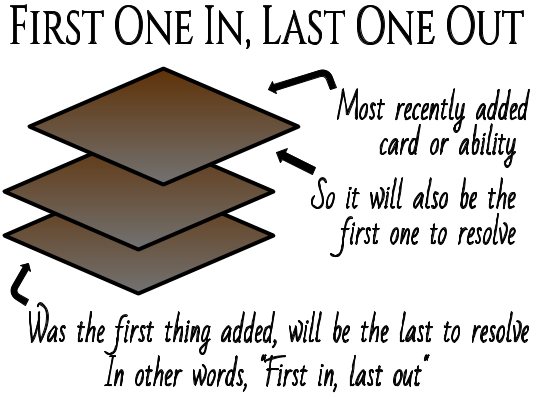 Player Two casts Cancel by paying its mana cost, choosing a target spell to counter, then adding it to the stack on top of the Swiftclaw.

So in our example, the Cancel was the most recently added spell. It resolves, countering the Swiftclaw. To “counter” a spell or ability means to send it (from the stack) to the graveyard and cancel its effects.

The Swiftclaw goes to the graveyard. The stack is now empty, so there are no additional items to resolve.

Now, in this exchange, the stack feels overwrought and cumbersome. These two cards are simple enough to figure out without going through each individual step, but we don’t have to look too far to find a situation where the stack is truly necessary.

The Stack: When Order Matters

Let’s look at the same Oreskos Swiftclaw, only this time, it wasn’t countered and is on the battlefield.

Player One wants to buff the Swiftclaw for a big attack, so they cast Titanic Growth, choosing the Swiftclaw as their target, and adding the spell to the stack.

However, Player Two was ready for a trick, so they’re going to use the stack to their advantage. In response (meaning while Player One’s Titanic Growth is still waiting on the stack), Player Two casts Shock, choosing the Swiftclaw as the target, and adding the spell to the stack.

What happens next? We’ll need to apply the same First-In, Last-Out rules we saw above. Titanic Growth was added first, and Shock was added on top of it. Because the top item in the stack always resolves first, Shock resolves and deals 2 damage to the Swiftclaw, killing it.

Titanic Growth resolves next, but because it no longer has a legal target (the Swiftclaw has already been moved to the graveyard), it will fail to resolve. 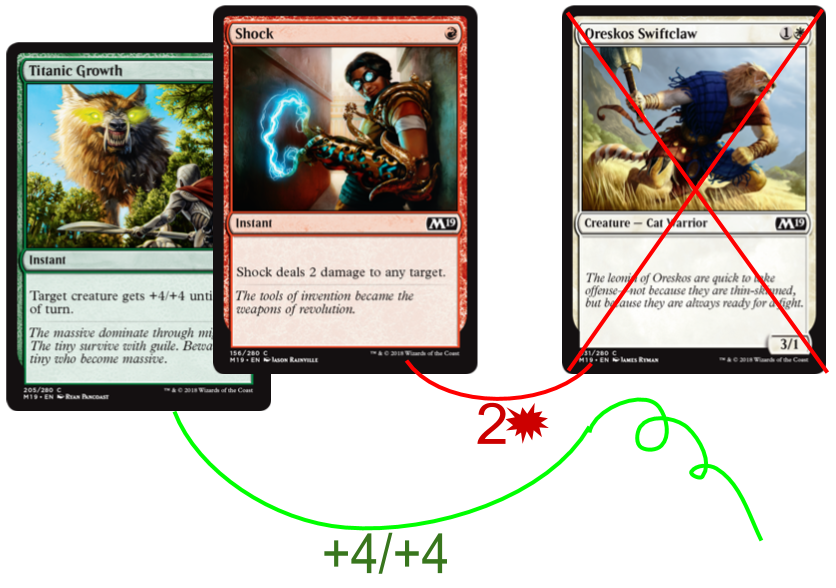 This example is just as interesting if it is reversed.

Let’s say, instead, that Player Two wants to kill the Swiftclaw before it can attack them. They cast their Shock, targeting the Swiftclaw, and adding the spell to the stack.

Player One sees the opportunity this time, and in response, they cast their Titanic Growth. They choose the Swiftclaw as their target, and add the spell to the stack.

Because the Titanic Growth is at the top of the stack, it resolves first, and buffs the Swiftclaw up to a massive 7/5.

Unlike the previous example, Shock still has a legal target, and it still deals 2 damage—but it does not kill the Swiftclaw, and a 7/3 kitty until end of turn is a pretty scary kitty. 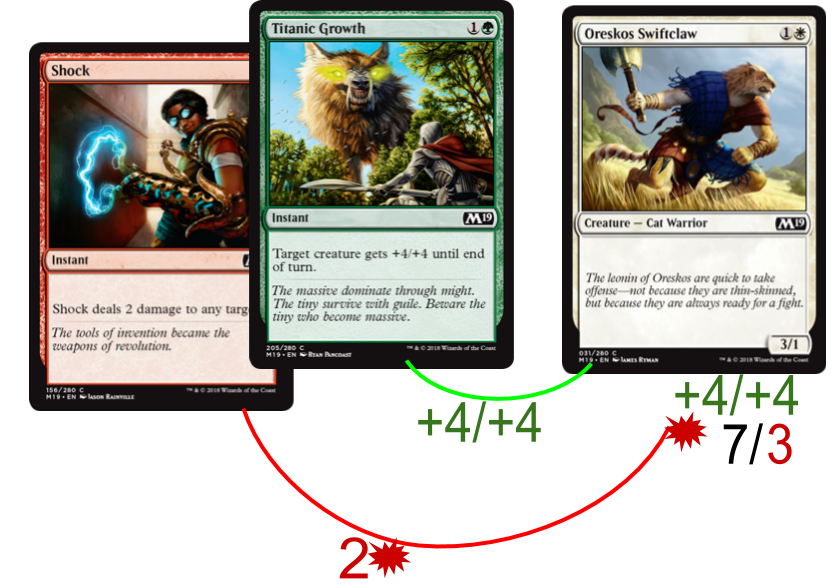 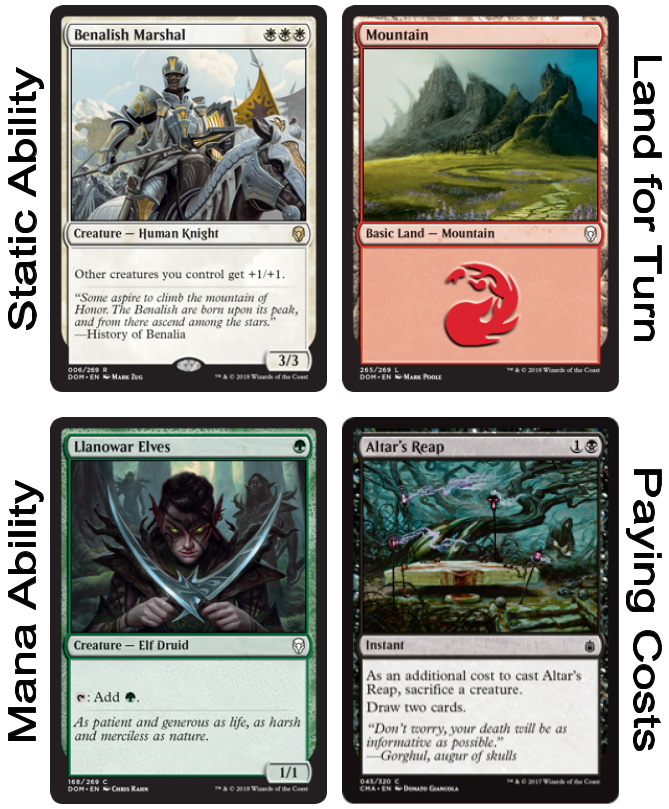 What doesn’t use the stack?

Static Abilities
A static ability is a card’s ability that is always on. In the case of Benalish Marshal, the Marshal itself could be countered or killed, but while he’s on the battlefield, his ability will remain in effect.

Playing your Land for turn
Your land is not a spell or an ability. It’s land, so it arrives in play without using the stack. Some lands may have additional activated abilities that would use the stack, but the land itself does not.

Mana Abilities
Another element of the game that doesn’t often get mentioned to newer players is how mana abilities work. Each ability that says “tap for mana” is a mana ability, and each basic land in the game has an unwritten mana ability for the mana type they produce. So what really happens when you cast a spell and pay the mana cost? Because mana abilities do not use the stack, you are tapping cards for mana, and THEN using the mana produce to pay the cost of your spell.

Paying Costs
Speaking of costs, your opponent has no opportunity to respond between you declaring a spell/ability and paying the costs for that spell/ability. In the case of Altar’s Reap, you must pay the cost of sacrificing a creature in order to add the spell to the stack. If you only have one creature in play, you must sacrifice that creature—but your opponent can’t respond and try to remove that creature before it’s sacrificed. The cost is paid as a part of casting the spell, before Altar’s Reap arrives on the stack.

Well, there you have it—a not-so-brief rundown on the stack and how to use it.

If you’d like some more complex examples of the stack mechanics and their effects, check out the game rulings below.

Triggers putting abilities on the Stack

Saga Timings on the Stack

Targeting and the Stack