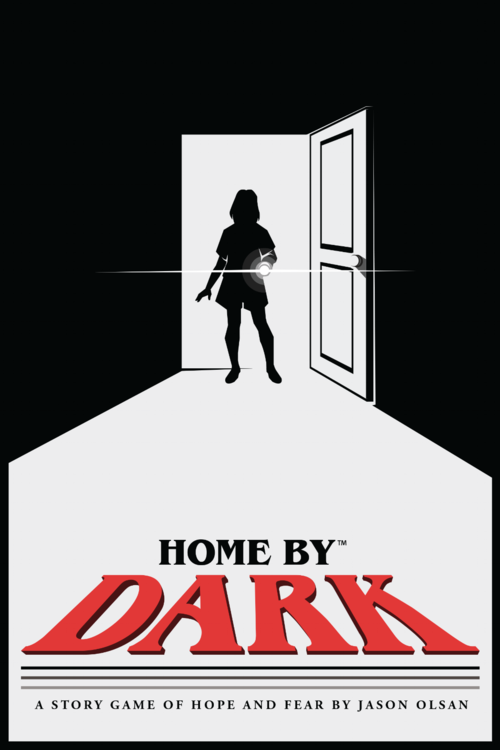 There’s something strange about that new substitute teacher. She just doesn’t look right, like her eyes are way to big, and the way she just stares out the window all the time, it is kinda creepy. Not to mention that a bunch of your fellow classmates have started acting weird since she arrived. You tried talking to some other kids about it, but only a couple took you even halfway seriously. A few of you decided to snoop around one day after school. You weren’t quite sure what you’d find, but a UFO hidden beneath the pool was just about the last thing you expected.

Home By Dark is a cooperative story telling roleplaying game inspired by movies such as “The Goonies”, “E.T.”, “The Faculty” and series like “Stranger Things”. All of the players take on the roles of kids that stumble upon something extraordinary, a being that has incredible powers but also needs the help of the players against a bigger threat.

For those that are familiar with traditional roleplaying games (RPGs), this is a bit different. There is no single person running a game of Home By Dark. Instead, the game is broken into scenes, and each player gets a chance to lead a scene. Everything about the game is a group effort, starting with the formation of the scenario itself. Collectively, the players will come up with a story, an ally, enemies, and their own persona for the game.

The single rulebook has almost everything you need to play, aside from pencil, paper, and a collection of regular dice. It even has some preset scenarios you can use if you aren’t ready to create your own from scratch yet. The only other thing you’re going to need is 3-5 people and about 2-4 hours of time to play.

Can you help your new friend and stop the bad guys? Just remember, you’re still kids and you need to be home by the time the street lights go on, or you’ll have your parents to deal with as well.