Think back to the first time you saw Luke and Han clamber into the turrets of the Millenium Falcon and face off against swarms of TIE Fighters, or how much your heart was pumping when Red Squadron and the rest of the Rebel forces began their assault on the first Death Star- the excitement as X-Wings and TIE Fighters danced in space, or when Darth Vader descended on the scene in his specialized TIE Advanced x1. These intense dogfights are what the X-Wing Miniatures Game seeks to, and succeeds in, recreating for each player at the table.

This week, X-Wing: Second Edition or “X-Wing 2.0” will be hitting the shelves and includes a much needed coat of polish, new mechanics for Force users, and breaths new life in ships that badly needed it, such as an obscure fighter known as T65 X-Wing. When we received copies of the new Core Set and Conversion Kits, I couldn’t wait to back in the cockpit. I couldn’t think of anyone better than the Barrister’s own Nathan, “The Kid,” to fly against.

I’ve been a longtime fan of the Galactic Empire, whether it’s in Star Wars: Imperial Assault, Armada, Rebellion, or X-Wing. If it wears Plasteel armor or is shaped like a slice of pizza, I’m playing with that. So of course, my first game had to be with my old Aces list- Darth Vader and Maarek Stele each in a TIE Advanced x1 and Soontir Fel in a TIE Interceptor. These three pilots have abilities that are very similar to their first edition counterparts, but with some noteworthy differences- Darth Vader now has Force points, represented by new two-sided tokens, as a resource to either take two actions in a single activation round, or he can change dice results in a manner that all Force users can. These new interactions alone made me eager to try out the new mechanics.

Across the table from me, my opponent set up four TIE Aggressors, the first Imperial ships to have access to Turret upgrade cards. Behind those, he also set up a TIE Phantom, which would later prove to be my undoing. With our asteroid field set and maneuvers dialed in, it was time to get to the action.

Okay, really it was two turns of flying in imposing formations before we got the the action. Once our forces collided, though, it was a flurry of laser fire and very good dice rolls. Almost immediately, Vader was able to shoot down an Aggressor, earning first blood and a mountain of stress due to the Admiral riding in the Phantom- each time I destroy an enemy ship, my pilots suffer a significant number of Stress tokens. Perhaps I should have done my research.

Soontir Fel skirted the Aggressor swarm in an attempt to pick off the Phantom that was suddenly the bane of my existance but it was too late- Vader was decimated by the swarm, unable to boost away from the firefight or evade the barrage of Ion lasers due to the Stress markers. With this blow, the tables turned on me.

Maarek Stele, in another TIE Advanced of his own, is able to disable or another pair of Aggressors, due to his ability to pick and choose which Critical Damage cards I deal to opponents, but it’s not enough- Ion cannons disable his ship and leave him a sitting duck for the Phantom to bring down. This leaves me with just Soontir Fel, who is known for both his ability to dodge out of the line of fire and his high agility value.

Soontir, with both some expert flying and fantastic green dice results, is able to finish off the disabled Aggressors left behind by Maarek but is ultimately brought down by the Phantom and Admiral Sloane, cloaking in and out of combat and still causing Stress and mayhem wherever he flies. With this, our first game comes to an expected conclusion- my forces are brought low. 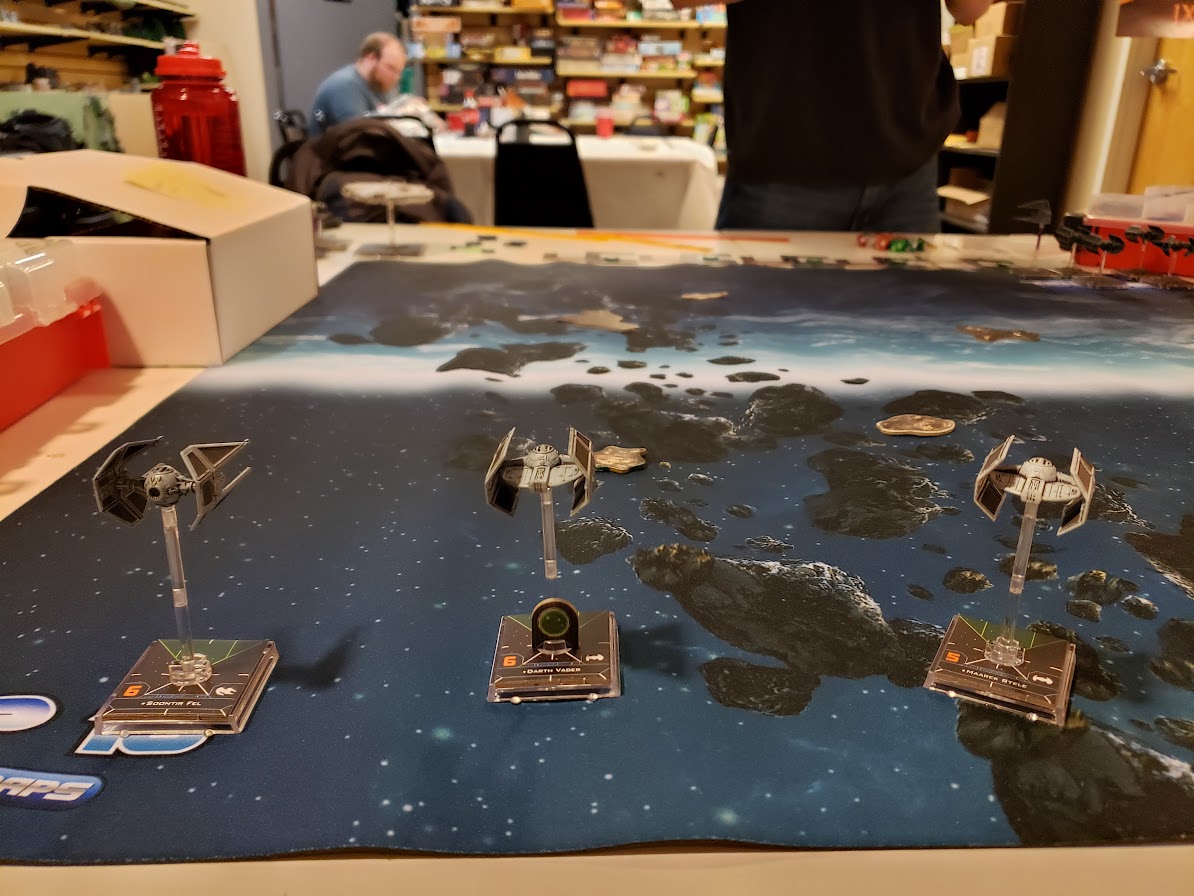 I love the smell of twin ion engines in the morning. 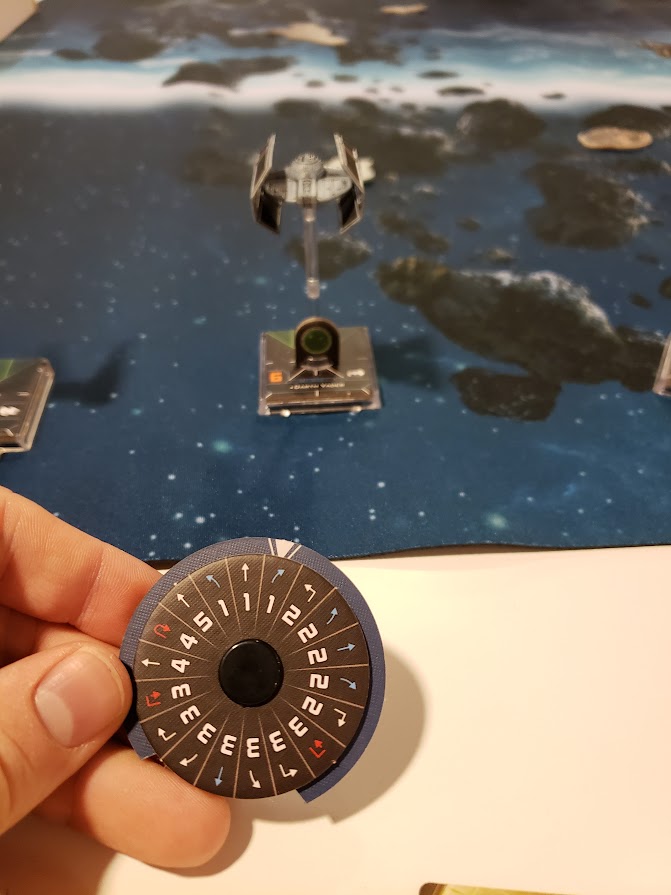 The new Maneuver Dials are perfect for a rusty pilot like myself- no longer do I have to spin the dial around ten times to remember which maneuvers I can take.

We decided to shake it up for round two. I swallowed my pride and decided to try out a terrorist- err, Rebel list and Nathan settled on Scum and Villainy. Both of his lists were tests for an upcoming tournament, and the Scum and Villainy list was a bit more fun and gimmicky. Perfect.

Again, I decided to fly with three ships- Luke Skywalker and Garven Dreis in T65 X-Wings and Lowhhrick in an Auzituck Gunship- basically the Star Wars equivalent of an attack helicopter. Nathan brought out two Protectorate Starfighters, better known as Fang Fighters. Alongside them, he placed a Customized YT1300- the version of the Millennium Falcon featured in the recent Solo movie. His ship brought along an interesting crew member, however- the infamous bounty hunter Boba Fett. What an unholy alliance.

Luke Skywalker, like Vader, has access to Force points and upgrades. I gave him the ability to harness his Supernatural Reflexes- spending Force tokens to boost or barrel roll before revealing my maneuver dial. Behind Luke, R2-D2 was plugged in and ready to repair my shields when needed, allowing Luke to be a glutton for punishment while Lowhhrick provided assistance by way of his Reinforce ability.

Upon placing asteroids and obstacles, the normal setup for a game of X-Wing, Nathan reveals the opening trick of the Falcon– he places the ship on an asteroid in the dead center of the board. That certainly changes things.

Immediately, I split Luke away from Garven and Lowie and send him to handle the Falcon. Garven’s ability is to share Focus tokens with a nearby ally and Lowie’s ability is to grant free Evade tokens by giving up his Reinforce tokens- the two are a match made in heaven. While they tangle up with the Fang fighters, Luke pursues his prey.

That is, he pursues his prey until his prey dumps a literal cloud of garbage out of the cargo bay. The Falcon’s ability to create a debris field means Luke has to veer back into the asteroid field and firefight, rather than take damage from candy wrappers, boxes of truck stop sandwiches, and the Bantha milk equivalent of Yoohoo. With this, Garven sees an opportunity and fires off volleys of Proton Torpedos before Han could escape- this begins the trend of Han rolling perfect evade results until the game’s end.

Meanwhile, the Fangs and Rebels trade blows. Lowie tries his best to protect his allies but Garven goes down. With his dying breath, he gives Lowie a Focus Token which is just enough for the Auzituck’s cannons to bring down a fang. Blood for blood.

With one less headache to deal with, Lowhhrick is able to turn and burn, destroying the other Fang fighter, but is left with one Hull point remaining, no shields, and no wingman. With this, Han sees his opportunity. He spins his turret, changing his firing arc to Port/Starboard, and brings the Auzituck down. Oh right, the new firing arcs can rotate. The score is now New Rules: 2, Nate 0.

Luke and Han are now the last men standing. Over the comms, Han chimes in.

“Hokey religions and ancient weapons are no match for a good blaster at your side, kid.”

Cue the Blinded Pilot critical result. Han’s unable to use special abilities to increase the damage he puts out. Luke’s unable to deal any more meaningful damage to Han due to the luckiest dice rolls known to Corellians. We happily ended the game in a draw.

I knew that dusting off my collection and playing against a tournament-winning pilot would be a risky endeavor, but the new gameplay updates and Conversion Kits made playing with old or new ships a blast and very easy to get back into, easily masking the sting of defeat. There’s never been a better time to get into X-Wing. Expect to see a lot more of Nate vs. Nathan at your local Barrister store in the very near future. 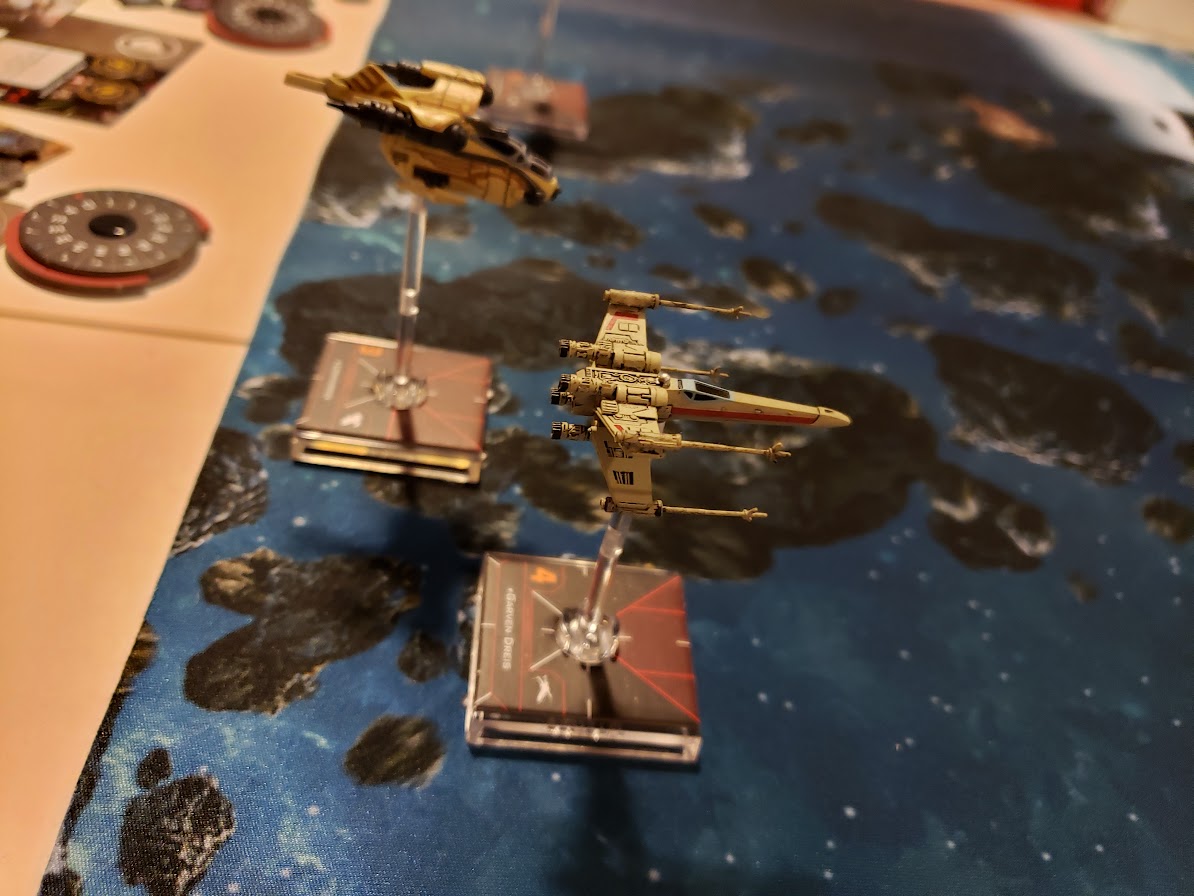 They say a new car depreciates in value as soon as you drive it off the lot. That applies doubly for Han Solo. 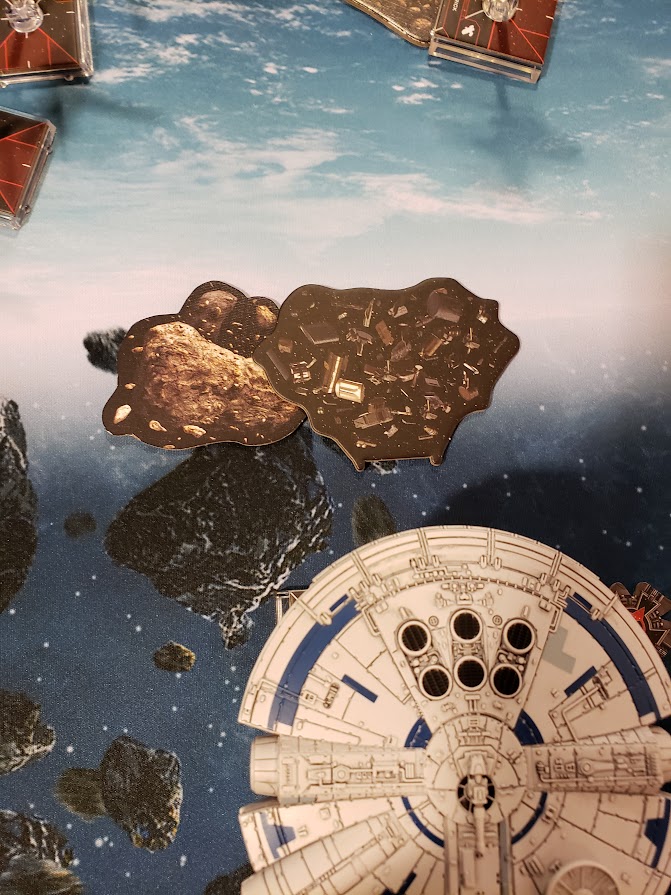 Han didn’t grow up with Captain Planet telling him to recycle.