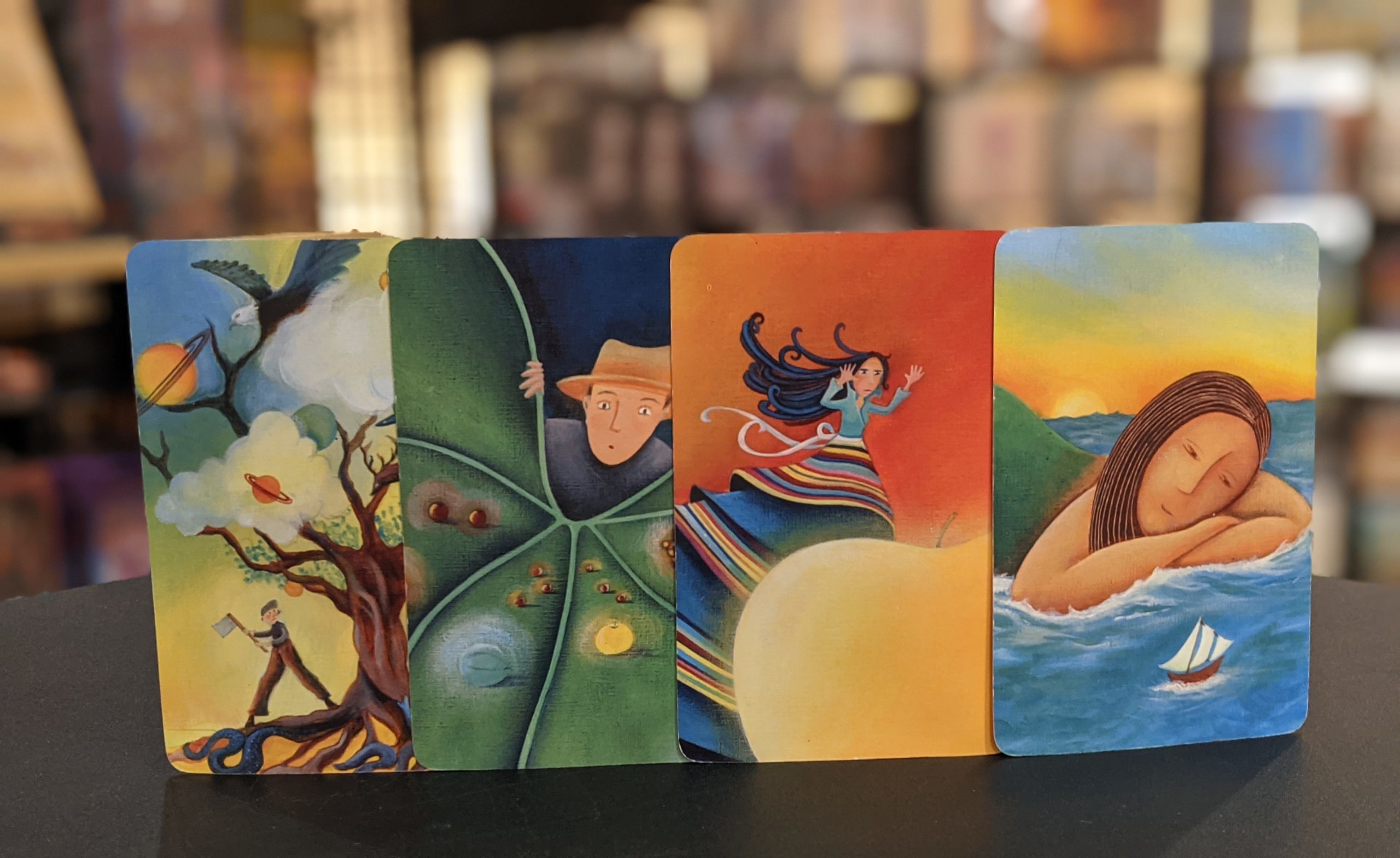 Blurring the lines between “strategy game” and “party game,” Dixit made a name for itself in 2008, which I believe laid some important groundwork for the board game industry.  I believe that it began a movement which could be described as “introducing more clever thinking into party games” and “introducing more accessibility into strategy games.”  I don’t hear very many people talking about Dixit anymore, but it’s still a good-selling game with several expansions available, and this game was a Pretty Big Deal around 2010-2013.  And for good reason.

Dixit is played with a large deck of detailed, dreamlike art cards, which evoke real human emotions and memories, and yet at the same time seem to defy any attempt at a literal or realistic description.

The Rules of Dixit:

HOW IT ALL BEGAN

People who played Dixit in its heyday often compared it to Apples to Apples, because the game involves “submitting a response.”  However, it’s more accurate to say that Dixit and Apples to Apples both descended from a common game “ancestor,” since Dixit began development simultaneously and on the other side of the globe from Apples to Apples.  Dixit is mechanically more closely related to the board game Balderdash (and Balderdash’s parlor-game predecessor Dictionary) because players must guess AFTER submitting a response, and the active player doesn’t perform a judging action.

In an interview with the game publisher Asmodee Editions, Dixit designer Jean-Louis Roubira straight-up describes his game as being based on the idea of using artwork as a stand-in for dictionary words, so we can easily see how an earlier game theme provided a jumping-off point for a new and revolutionary implementation.  Game designer (and founder of the French game publisher Libellud) Régis Bonnessée explains that each of the Dixit art cards were carefully developed to evoke a specific theme or emotion.  So the interactions you get when playing Dixit provide a much deeper player experience than the ol’ game of Dictionary.  Even so, Jean-Louis says they spent 10 years developing Dixit. 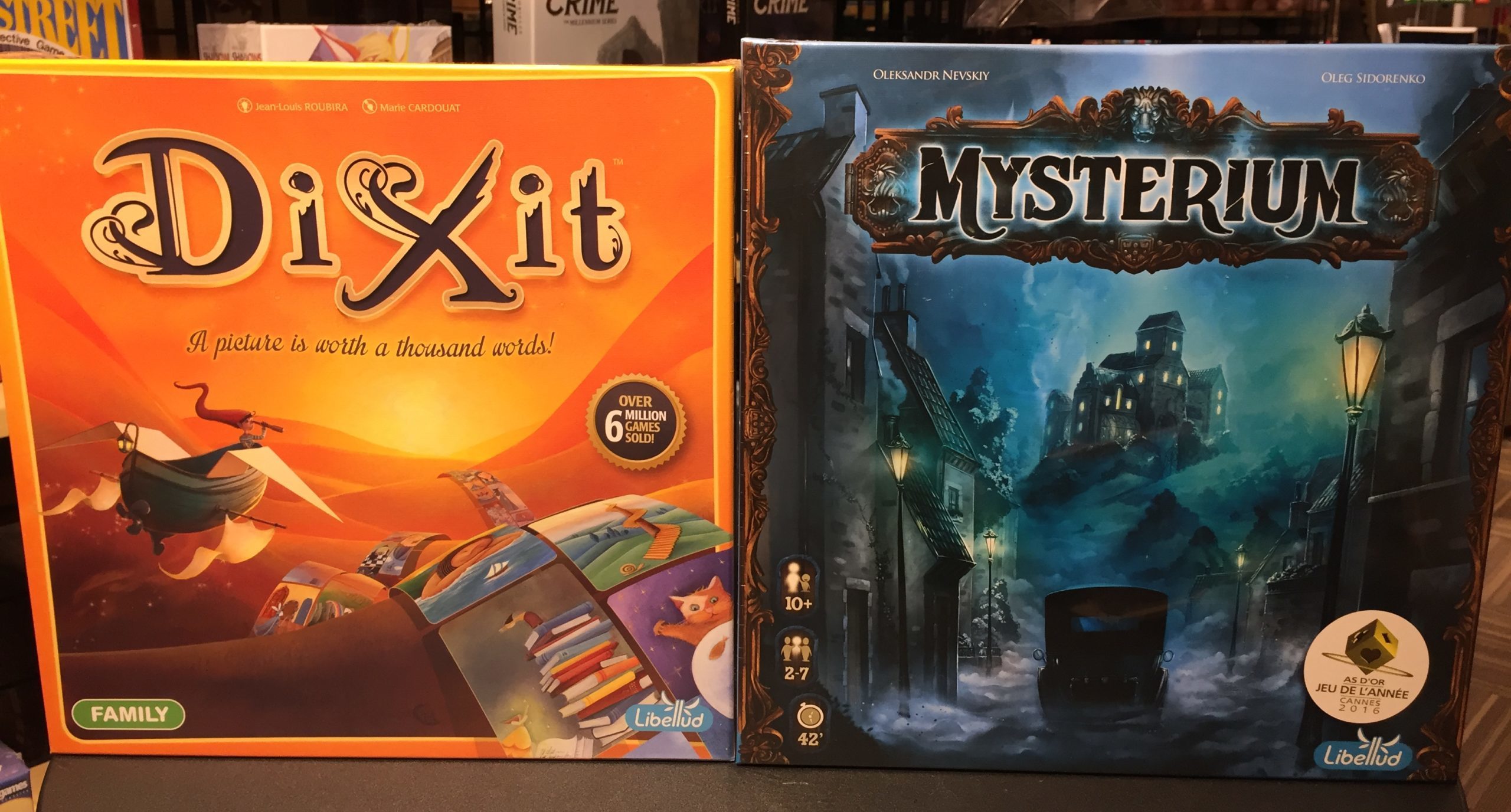 Photo of Dixit and Mysterium side-by-side

NOTHING NEW UNDER THE SUN

It’s uncommon for board game designers to invent a completely new and unique game out of whole cloth.  Frequently, it’s a case of putting a novel twist on something that already exists and works.  The question is whether you can design something that’s different enough to create a novel experience, without just making a copy of someone else’s work.

Seven years after the release of Dixit, we saw the next major entry in the “art cards” game genre: Mysterium.  Except this one really wasn’t rooted in the long lineage of party games.  It’s a cooperative game about hunting down hidden information through clever communication.  The Ghost must communicate information to the other players (the Mediums) using art cards, in an attempt to help them solve the Ghost’s murder.  It has nothing to do with bluffing, judging, or even competition, so where did it come from?

Mysterium game designers Oleksandr Nevskiy and Oleg Sidorenko were struggling in the nearly-nonexistent board game retail market in Ukraine when they decided what their market really needed was more access to games – domestic, published in Ukranian, games.  So they decided to bite the bullet and design their own.  They explain in an interview with French game magazine Plato, that they wanted to emulate the adventure game and puzzle game genres that were popular in PC gaming, and bring that experience to the tabletop.  And they were, in fact, impressed and inspired by the game Dixit.

Their game was originally titled Mysterious Signs, and when they landed their first (Polish) publisher, it was translated as “Tajemnicze Domostwo” for the first printing.  When they expanded into other markets, they decided to choose a new name that wouldn’t require constant translation: Mysterium.

The one thing Oleksandr and Oleg really nailed was putting together a tabletop game experience that would be deep, rich, and full of decisions for the gamer, while still providing a fun, unique, and captivating experience for a historically non-gamer.  How did they accomplish this feat?  Oleksandr explains that board games are still an emerging market in Ukraine, and there are really two types of people in their home market: a small group of game geeks, and whole bunch of people who have never played modern tabletop games, who bring no stereotypes to the table, and who come to game design with a blank slate.  Oleksandr is the first type, Oleg is the second.

In an interview with Ares Games, Oleksandr states, “Usually the basic idea comes to me first, and I share it [with Oleg]. Then, if it seems interesting, we make a prototype and test it… Oleg is in charge of the balance and mathematical component. He is very good at that. He has a special talent – he can give very detailed analysis even without playing the game or without making changes. And normally, he is absolutely right. Then we argue a lot, make lots of changes, get back to what was before, and so on, until we see that our testers want to play the game again. After that I begin to work with artists, and I am responsible for graphic design. Oleg writes all the rulebooks to our games and works with proofreaders. That is how it works.”

And that solves that mystery!  Mysterium was so successful after its release here in the United States that it was Board Game Barrister’s 4th most top selling board game in its first year.  It became a cornerstone in the “party games for gamer geeks” /slash/ “strategy games for social gamers” movement, and it led the way for even more “art card” games, such as Muse (2017), Shadows: Amsterdam (2018), One Key (2019), and Mysterium Park (2020).