A Tale of Two Escape Rooms: Unlock! vs. EXIT

Over the past decade, the Escape Room craze has grown steadily from a distant novelty to a readily accessible activity for groups of friends and workplace team-building.

If you haven’t yet had a chance to visit one yourself, an escape room is a hands-on real-time challenge. Your group begins the challenge in a small room that is filled with all manner of sundry and paraphernalia, and you’re given a set amount of time to use the clues spread through the room to find your way out.

You might find numbers scratched on the underside of a desk; a flashlight with a blacklight bulb; books concealing multi-colored vials filled to different levels; or an old timey rotary phone that keep repeating the same hypnotic poem.

Many of these discoveries are clues that will aid in your escape. Many are red herrings. And each escape room has its own surprises that make for unexpected “Wow” moments as you progress.

I remember my first time at an escape room. We walked in the front door of a nondescript downtown building to be greeting warmly by a family and then ushered into what appeared to be a cramped private investigator’s office. Then the door lock clicked behind us… We had an absolute blast, perhaps because we weren’t sure what to expect, or that we didn’t expect to experience so much content in such a tiny room.

Speaking of LOTS of content in a tiny space, we’ve also seen a recent boom in “Escape Rooms in a Box.” These games aim to recreate the feel of an escape room in an incredible accessible way. They’re becoming more and more popular, and understandably so—they’re considerably less expensive than a full-on escape room experience, and you can play on your own schedule, from the comfort of your own home.

Two series stand out in how they’re creating that escape room feel and defining their own style, all in a tiny box. Those series are Unlock! created by Space Cowboys and EXIT: The Game from Thames & Kosmos. 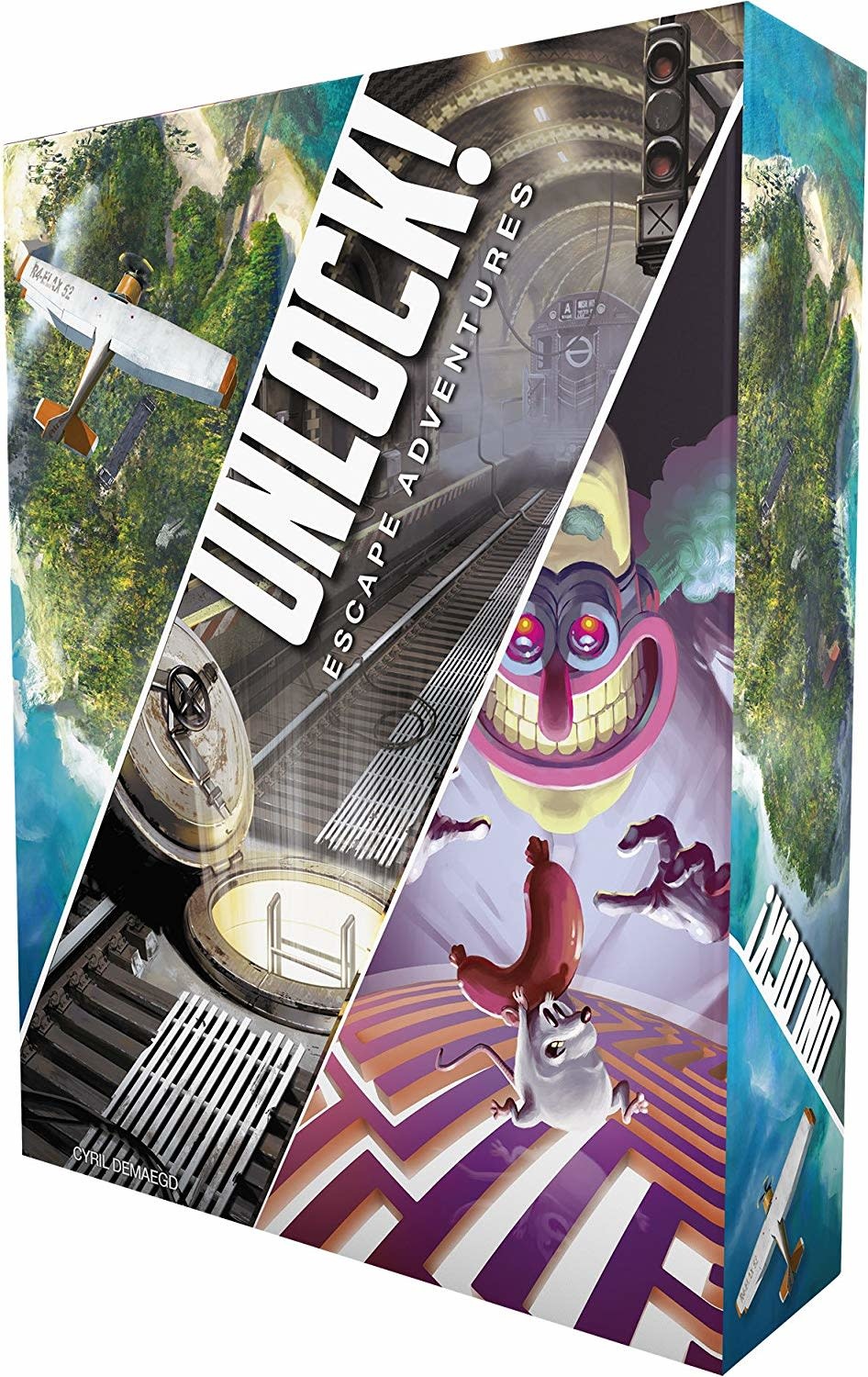 Unlock! at a glance:

In Unlock!, the entire escape room takes the form of a single stack of numbered cards. Some of those cards will display overhead views of the rooms, while others will provide closer looks at specific parts of the room, like a desktop or a locked door. Others still will represent individual items, like a key or a note.

Each important element in the room is represented by a card image, so the gameplay in Unlock! comes closer to recreating the collection of disparate items one finds in an escape room, as well as the spatial representation of an actual room.

Your advancement through the challenges will rely heavily on numbers that appear on the back of each card. For example…

The card featuring old iron key may be card number 11,
The locked wooden storage trunk shows number 35,
If you add a blue key card to a red lock card, you may reveal the card whose number is the sum or those two—46 in this case—to see whether or not the key unlocks the trunk. 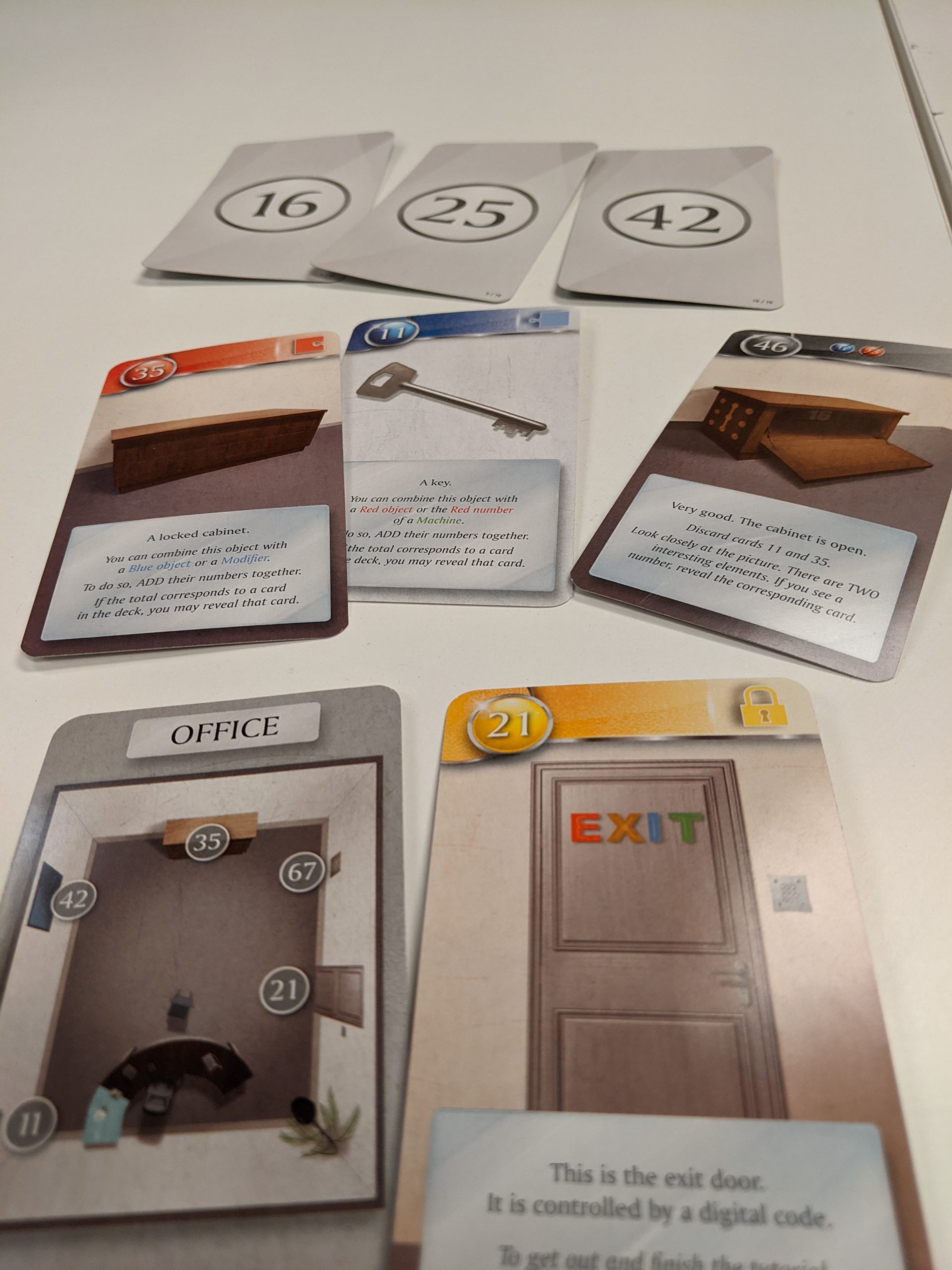 I should point out that Unlock! is probably not a good choice for players who struggle with vision of close-up objects. One of the rules in the game is that you may reveal any cards whose number is you can spot on the card images. The designers have taken the opportunity to hide small and camouflaged numbers on some cards in every scenario, which are difficult to see even for those without any vision concerns.

The Unlock! series is accompanied by a free app that you’ll want to download before you play. You won’t use it frequently, but you will at times need to attempt to enter codes into machines or other devices, and the app is where you’ll do so.

The app also provides a countdown timer, and a “Wasted Time” button that some cards will require you to push when you’ve tried to combine a key and a lock that don’t fit.

The clues and solutions in each Unlock! game will not change, so each individual adventure won’t offer any replay value, unless you wait a year or two between attempts. Personally, I’m happy to hand my box off to a friend or family member so that they can try their hand at it.
Bonus points if you can organize some sort of Unlock! trade group between multiple different households. 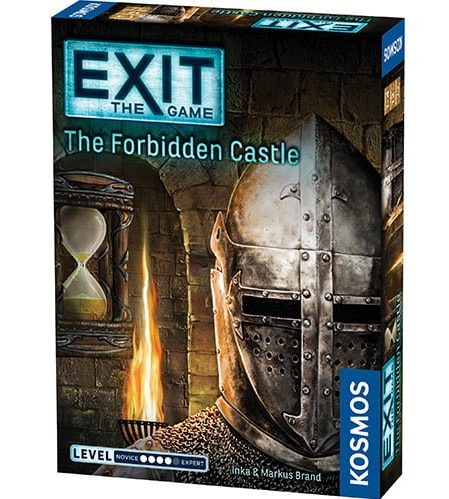 EXIT at a Glance

The EXIT series is all about puzzles and neat hands-on components that will help you solve those puzzles.

You’ll find yourself positioning clues atop one another to see where they point, or running clear plastic components over text to see which words reveal themselves.

The lower-difficulty boxes will take you on an adventure, one puzzle at a time, so that you always know where to focus your attention. The tougher boxes will simply hand you clues to numerous puzzles and leave you to organize them as you progress. 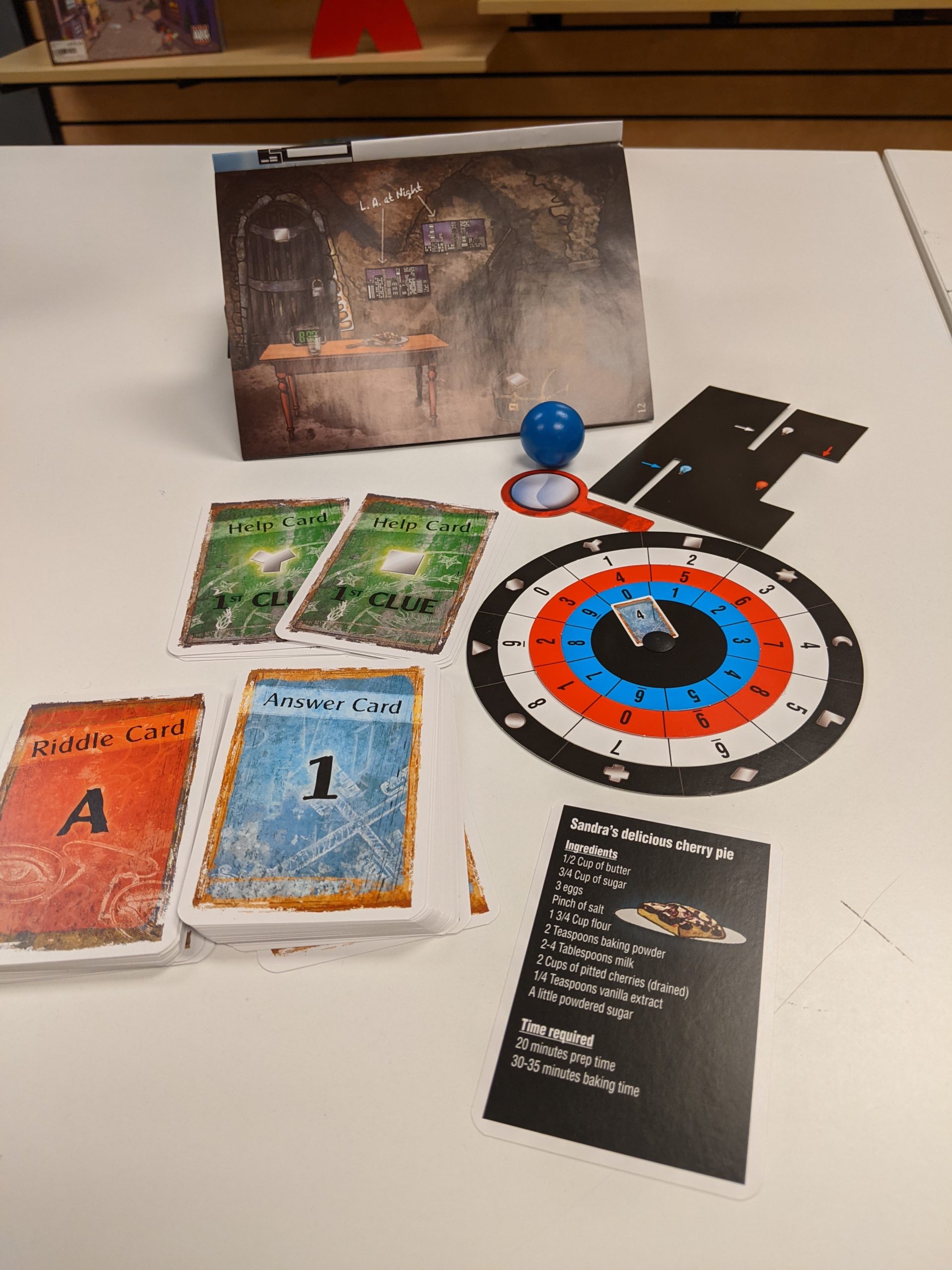 Each puzzle in an EXIT game is assigned a shape, so that you’ll have an idea of which clues pertain to which solution. Perhaps you’ll start with cards that show the square, star and circle shapes. This means you know you have at least some clues to begin solving those three challenges.

And how do you solve a puzzle? Each EXIT game’s entire puzzle structure is built around three-letter solution codes and a decoder ring. This ring has three rows of numerals, and when you think you’ve found the three-letter code that will solve a puzzle, you’ll enter it into the ring and it will tell you which Answer card to reveal. Sometimes this card will tell you that you’re wrong and should keep searching, but when you’re correct, you’ll receive a set of new clue cards to help you solve the next!

So here we must discuss one of the most notable features of an EXIT game, to which different players will react either positively or negatively. Unlike the Unlock! series, EXIT will demand that you destroy that components of your box, rendering the game unplayable after the first time. Now, perhaps the word destroy paints this feature in a negative light, but it’s actually quite engaging and fun. You’ll be asked to interact with the game’s components in a highly manipulative (but single-use) way, such as cutting out cardboard measuring tool specific to a puzzle; folding paper materials to see where they overlap; poking holes in pages of the rulebook to create touchable clues for yourself; and writing on cards to record your journey.

I know players who love the finality of this one-time play style, as well as others who can’t help but consider it wasteful. It’s worth noting that EXIT’s cards and components are recyclable, so at least you won’t need to send your box and all of its contents off to a landfill.

At the end of your adventure, you’ll receive a final rating based on the number of hints you use and the time it takes you to complete all the puzzles.

Of course, there are plenty of other Escape Room series out there, and there are always new ones springing up, like the new Break In series from PlayMonster.

Ready to test your puzzle-solving skills? Start your escape here.